To go with the ruined church piece I decided to start making some tile pieces, that when put together will form an old graveyard. These can be used to make up a diorama of an old churchyard or arranged in different configurations to give different graveyards in different locations, some more run down than others.

I’m basing the various concepts on some of the older graveyards locally, and the graveyards featured in Vampire Diaries Series 1, and various episodes of Supernatural. 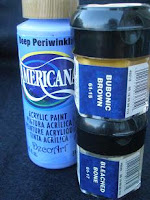 I started by finishing off the church ruin itself, where some of the filler had formed small lumps I decided to paint these up as mould growing on the ruins. These were painted using Games Workshop’s Bleached Bone and Bubonic Brown, and Americana’s Deep Periwinkle. 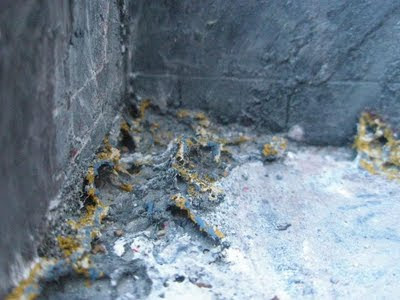 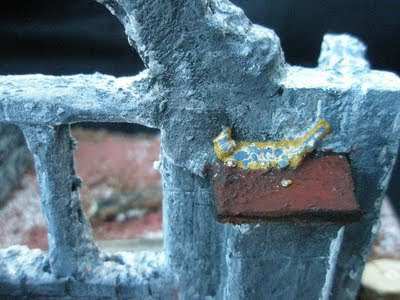 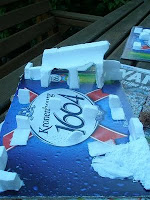 With two pieces of card and some small cut up pieces of polystyrene from the washing machine packaging I started to layout the first two tiles of the graveyard. The first has a large double arched entrance way now slightly collapsing and some random external wall pieces. The other is more interior, with mainly graves in various states of disrepair and some at an angle implying subsistence. 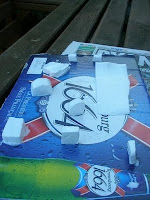 These I then covered in wall filler, but this time before plastering it on I mixed it with some PVA glue and black acrylic paint giving a very dark grey initial effect to base material before I started. This will make the stonework look very different to the walls of church itself.
To layout the actual grave areas I’ve added some light stony areas. (Talus by Woodland Scenics, Fine Natural.) 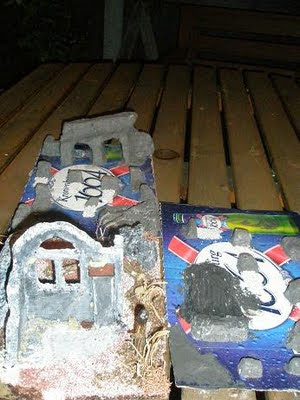 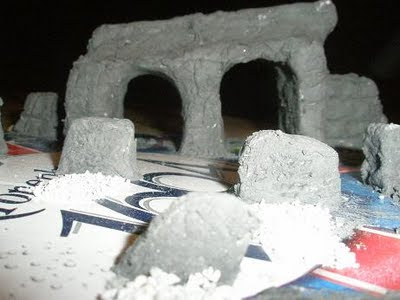 Fire in The Old Church 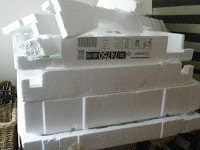 Following my last posting the new washing machine was delivered and installed, as part of the service the old machine is taken away for re-cycling and so usually is the packaging the new machine is delivered in. This time I asked them to leave the polystyrene, at first there were raised eyebrows but once I explained why and showed them one of the cottages they dug a couple of other choice pieces off their van for me, so here is my new horde of material and I’m already eyeing it up with ideas forming. I’ll let the ideas bubble away for a while before jumping in.
Besides, there is a lot of other work to finish first. 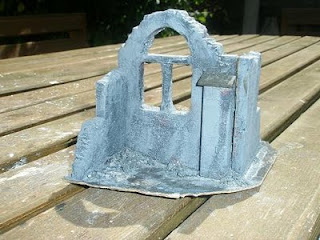 Mainly this week I’ve been working on the old church ruins, the odd plastic pieces passed over to me by BigLee some (embarrassed cough) years ago. Now, inspired by the set from the first series of The Vampire Diaries I’ve started on this small diorama piece adding a piece of the broken wall originally made for the castle ruin set and some pieces of twig and branches cut down from the garden. 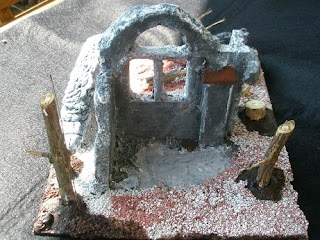 I based the model onto some thick card and using wall filler made some mounds and fixed down the larger twigs as stumpy trees. The whole effect I was going for was for an area of land around the church where nothing now grows, having compiled my own small legend around the piece as I worked on it.
Three different basing materials have been used, grey stone rock debris (Talus by Woodland Scenics, Fine Natural) a red dusty sand (Javis ‘Countryside Scenics’, Sandstone scatter) plus a brown scatter material which I’ve had in the cupboard so long I no longer know the make or colour scheme I’m afraid. 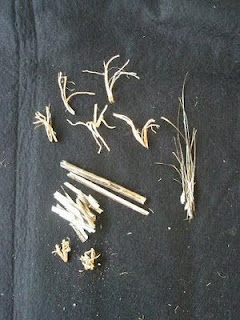 I mentioned in the previous update that I tried to hide the very straight edge plastic look of the model piece, this I did by mixing a small portion of wall filler in with the second basing coat which I repainted the model with, before adding and blending white to make the stone effect. The same paint scheme as used for the castle ruins, allowing me to utilise one of the pieces from that set.
I found the old handle from a wicker basket down the side of the old washing machine, this I’ve pulled apart and used for some of the wild grasses. The natural brown colour adds to the effect of dead plant life. I also stripped fine strands of stringy bark from the old garden canes; these are the very thin straight strands you can see on the model.
Now for the back story... 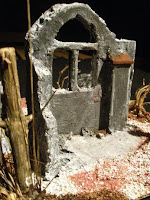 Asgar turned to his brother. “So what is this place?”
His brother glance at him. “An old church, destroyed by fire – or so the legend goes.”
“Legend?”
Mendez sighed. “They say devil worship took place here, a hundred virgins were sacrificed to open a gateway to the fiery pits of hell. They succeeded but the fire they unleashed burnt the place down. The land is still stained by their blood.”
Asgar looked down, the land around his feet was certainly very red in patches.
“Not quite,” called Dynaclease, the third of the brothers climbing over the old tree stump. “Devil worship was being practiced, but the gods sent a fireball from the heavens to cleanse the ground. It struck the church and brought down the tree over the entrance to the crypt, trapping them all in and so they perished in the fire caused by the lightning strike.”
“I see,” Asgar said stepping backwards. He cried out as a large area of ground gave way under his feet and he fell crashing through into the darkness below. 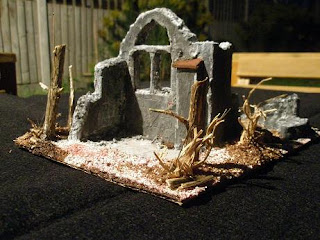 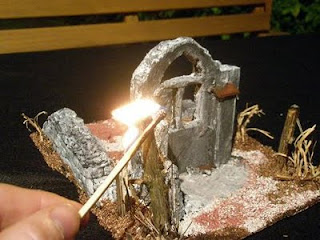 To give the effect of the possible lightning strike I actually set fire to the tops of the stumps and charred them. There’s nothing like being authentic.
I have a little more detail more to finish on this piece before it’s finished, I hope to get it completed over the weekend. 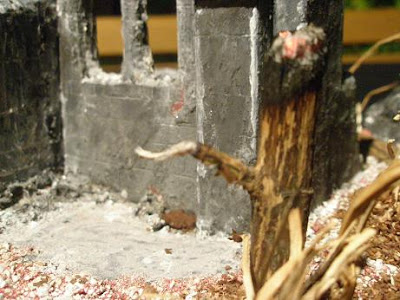 Apologies for the lack of updates last week, got a bit distracted last weekend with one thing and the other, including a washing machine that decided to smoke the clothes rather than clean them. New one being delivered next week, you never know there might be some interesting packaging to go with it.
Here are the latest updates from the workbench. 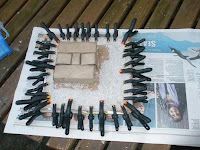 The base for the thatched cottage that got too wet was a bit beyond repair, so I peeled the top layer off and glued this to a new base made in the same way to the original. Now I need to repair some bald patches on the base, before adding extra colour and texture to the ground. I have started to build a small wooden fence around the outside of the pub grounds using the coffee sticks, and incorporated an interesting piece of twig I found to make a felled tree trunk. 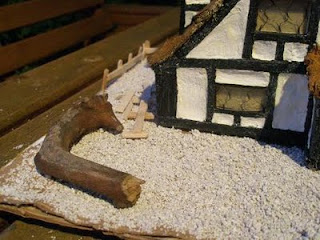 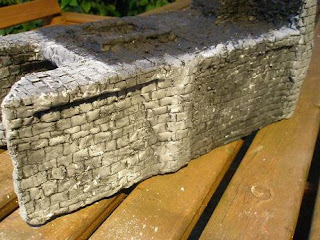 I’ve started to paint up the entrance to the castle ruins; this is basically using white and black paint mixed in varying shades of grey and neat white. I’ve also added more stone work to the remains of the room. I wasn’t going to brick up the entire underside, but some parts seen at the wrong angle will show up the bare polystyrene so I will have to make sure the underside walls are covered at least. 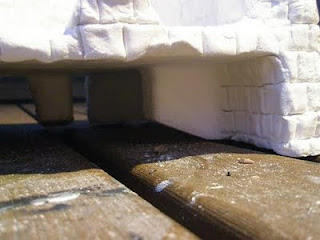 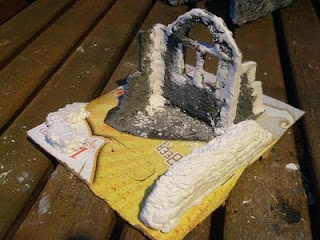 The plastic pieces of a ruined church I got from BigLee a few years back which I tried to fill and paint then left for dead have been resurrected. I’ve stuck the piece as was onto a new larger piece of base card to extend the ground work and used some of my current ready mix wall filler to soften the plastic edges and fill the gaps to take the straight, square edges off. I’ve also glued a piece of the polystyrene covered broken wall from the castle set to the base.
I’ve been re-watching the first series of Vampire Diaries, and the old ruined church set where the vamps were locked away has given me some idea as to what I want to do with this piece now. Plenty of greenery and sticking up boulders and stones, the graveyard part of it I’ll keep for a later project. I’ve a few plans for an old graveyard layout.
Plus I've added the town houses to Gallery Page.
Posted by DJ Kettlety at 22:07 2 comments:

The spectators gathered under a blazing sun on Sunday afternoon to watch the Roman Gladiatorial Games, a re-enactment of what might have happened on the site of the Guildhall Courtyard some many moons ago.
The audience were split into two cheering sides, one supporting the ‘home’ team LONDINIUM (London), whilst the other – where we were, supported for CAMVLODVNVM (Colchester, Essex).
The games started with the two commentators working the crowd, the arena was anointed with oil and the dedications made to the goddess. Then in came the Emperor on his chariot, and the games were ready to commence. The combatants made their entrance then a heckler from the crowd stood up, jeering the display – he was soon dealt with, dragged before the Emperor and thrown into the area where he was duly dispatched.
Several rounds of fights were played out, I’m not going to tell you who won, but just to say that the teams put on a well performed display with plenty of blood spilt to please the baying crowd, either calling for mercy for their fallen team or for a bloody dispatch for the opposition.
Here are a few photos of the event, but please don’t tell everyone. We’re not supposed to let you know that the Emperor ever came... 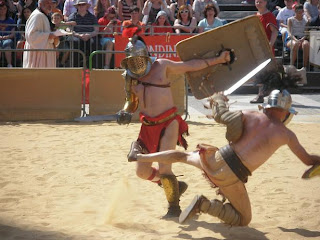 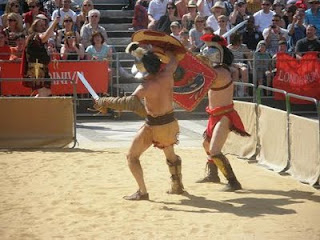 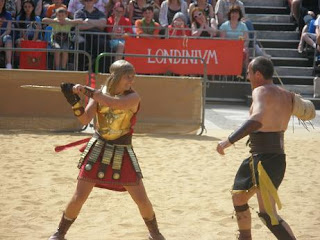 The Gladiator Games were presented at the Guildhall Yard, off Gresham Street, London by the Museum of London on the 30th and 31st July. The Gladiators were supplied by Britannia.
Posted by DJ Kettlety at 21:46 3 comments: