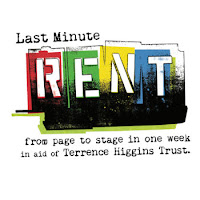 On Sunday night the Shaw Theatre played host to a one night only production of RENT. Staged as part of their celebration of Pride, this production came from Last Minute Musicals, their aim is to get a show from the page to the stage in a week.

This is some ask. I’ve seen Rent many times, both in the West End and in various provincial productions, I play the soundtrack from the Broadway version quite a lot – especially when doing the gardening. (You should see my Tango Maureen with a flymo – actually on second thoughts, probably not).

Ok so we were missing the multi-levelled set, so Mimi couldn’t swing down with full acrobatics during Out Tonight, but that didn’t matter – because they had an awesome cast with fabulous voices who brought this show to life. Every one of them threw themselves into the performance with gusto, the complicated rounds were perfect – it beats me how they pulled this off in a week and I’m still marvelling at their La Vie Boheme.

One of the cast admitted to me prior that he was both nervous and exited in equal measures, which I think had to be true for all of them, but in the end there was nothing to fear and the whole audience rose up as one at the end. I’ve not seen such unanimous response in a long time, in a well-deserved standing ovation that I think touched them – but they had well and truly earned it.

Well done to the team who put this on.