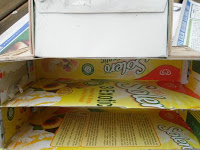 A short posting this week, other jobs are taking priority at the moment, although I did find some time to try out something I’ve wanted to do for a while and see if I could use small boxes as a basic shape for a house rather than the foam board interior.

I’ve often put a few different boxes together in different positions to make a skeleton house shape, but once I actually went to do put the building together it wasn’t quite as straight forward to get a unusable shape, and some boxes are too weak. 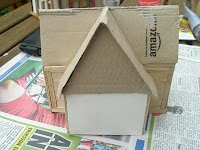 This attempt I’ve use a Solero box cut in half and turned inside out along with another box taken apart and turned inside out. The other parts of the skeleton were from packing card from a mail order delivery. By turning the boxes inside and gluing them back together it does improve their strength slightly, plus the non glossy card is easier to work with.

I was going to build this as one of the houses in the style of my suburb town, but my supply of coffee sticks has grown recently, the storage boxes have over flown so I’ve decided to use some of these and make this one of the ghost town buildings.  I think is working better as I’m not sure how the thin card would have held up against the wall filler. 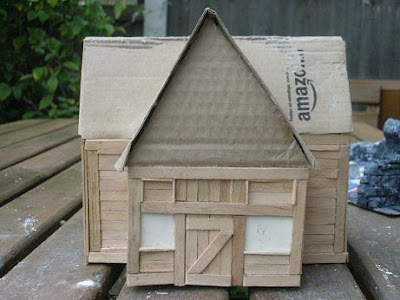 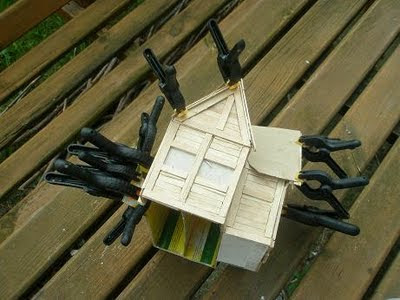 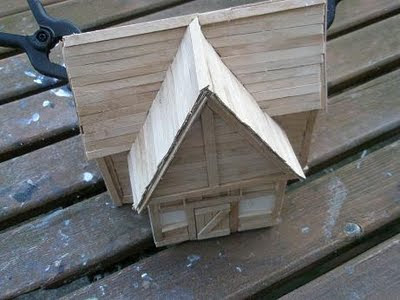 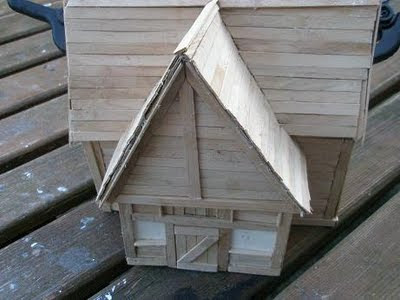 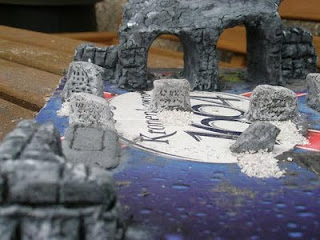 Not much to report this weekend, house work and other distractions got in the way, but I did find some time to progress the graveyard pieces slightly.
Most of the basic paint work has been completed on the stone arches, the walls and gravestones. I started with a dark grey base, as a result of the wall filler being mixed with black paint before it was used on the polystyrene.
For the stone arches I then washed over these with black ink to try and get the dark grime deep down in the stone work before painting over the top with a varying mix of grey and white. For the headstones I simply worked white paint over the top of the original grey colour of the wall filler. The other stone work and general rocks sticking out of the ground were worked with a lighter grey than the built stone structures to give some shade to the otherwise quite grey layout. 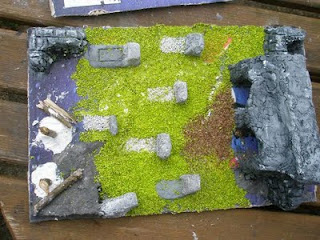 To one piece I’ve started to add some flock, this panel of the graveyard borders on the edge of the ‘cursed’ zone, so the main area is going to be flocked with green grass, and the edge where I’ve put a couple more pieces of old twig as dead trees will form the start of the area of devastation.
The twigs have been fixed in place using PVA glue and more wall filler to build up the mound around the root base.  I’ll probably be burning the tops of these as well at some point. 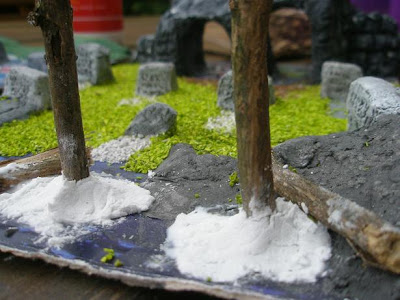 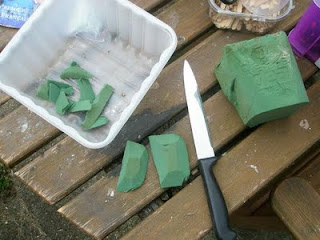 On the other section I’ve glued some flower arranger’s oasis. I sliced this into a thin layer using a sharp kitchen knife, and then shaved the sides to form as small hill shape. The off cut pieces I glued down around the base of the larger pieces and pressed them down firmly. These then allow me to ‘plant’ trees as in this photo. I’ve a few different trees with wire trunks that can be inserted and removed from the oasis. This will allow the setting to be changed quite dramatically when finished just by the different trees I can insert into the oasis. 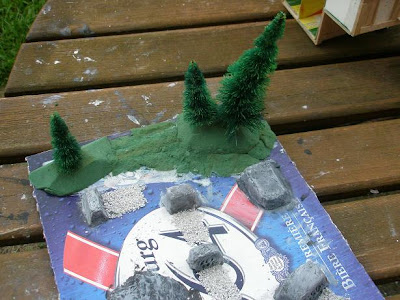 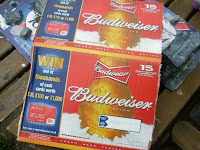 I was just about to cut up another beer case, this time a Budwiser one when I noticed the competition on the side, entering a pack code on line to win. Not expecting anything I nearly just went ahead with the cutting but thought ‘what the hell’ and entered the code online. What do you know; I won a £10 prize. I’ve now got to keep the box whilst I claim. If I hadn’t kept the box for model work it would probably have already been in the recycled bin by now – so my hording has finally paid off.
Posted by DJ Kettlety at 22:02 3 comments: