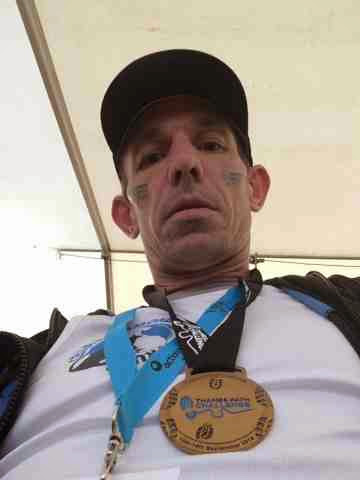 I posted a few days ago about Marc's Thames Path Challenge. 100km in 24 hours.
Well, he's done it. Marc finished the walk at around ten to eight this morning. Official timings are yet to come. But he has the medal.
Marc was raising money for the Celia Hammond Animal Trust.
Once again, congratulations Marc a great achievement.
https://www.justgiving.com/marcmajor/
Posted by DJ Kettlety at 12:18 No comments:

Over on that scourge of social media a friend challenged me to name 10 books from my youth of some significance – or words to that effect. It’s amazing, the second I’m asked that the first thing is I can’t remember any. But with a little coaxing the mist cleared slightly and out came some jumbled thoughts. Here I explain why I picked the titles I did, but I’ve not mentioned very much regarding content of these stories.

The Secret of Moon Castle
By Enid Blyton
This appears to be part of a series that I never knew at the time. I think the combination of the words Moon Castle must have been the trigger for me. I have a some memories of this, particularly an L shaped room. The book itself by the time I no longer owned it was falling appart, I do remember that.

Interestingly I just looked this up on Wikipedia, it states it is part of a series of 5 books then goes on to list 6 titles in the series. Certainly was a mysterious series of books.

Doctor Who and the Cybermen
By Gerry Davis
I've limited myself to just two Doctor Who titles in this list, and I've a different reason for selecting the two I have done. This was one of the first Doctor Who novelizations I owned and in the end I actually knew the backcover blurb off by heart. One day our school library obtained three Doctor Who titles, this being one of them. A mate and I stunned the school's librarian by performing a 'mind reading' act where as he read the back cover in front of her, with my back turned I recited what it was they were looking at.

The Belgariad (series)
By David Eddings
One of my first forays into sets of fantasy fiction. This epic series set me on my path for fantasy.

Silly Verses for Kids
By Spike Milligan
There is no way I could leave this book off the list. My copy had the orange cover, I've seen it online with a blue one since. It was just bonkers, and so many of them stuck in my mind to the extent that it doesn't take much to set me off quoting it even today. 'String is a very important thing...'

Doctor Who and the Horror of Fang Rock
By Terrance Dicks
My second Doctor Who of this list. TV series and novel both by Terrance Dicks and the edition that stands out for me is the original with art work by Jeff Cummins. I remember reading a library copy of this whilst off sick from school. It was hard going, since all my body wanted to do was sleep, but I wanted to read it. I remember the GP calling back round to see how I was a couple of days after his first visit even now, but I had no memory of his first visit even then.

I could quite so easily have filled this list with Doctor Who books, but I made sure I allowed other titles to get a look in. I had to include a Terrance Dicks since he wrote so many of the Doctor Who novels and it really was these books that made the young me want to read. I’ve had the pleasure of meeting Terrance at several Doctor Who conventions and having the opportunity of thanking him for these books that got me enthusiastic about reading which has had a massive impact on me.  I’ve also got several prints of the covers from artist Jeff Cummins who also attends these events and every time I see this artwork it gives me a buzz and happy memories.

The Servants of Ark (trilogy)
By Jonathan Wylie
Another collection of fantasy and prophecy that caught me and I remember reading quite obsessively.

The Lion, The Witch & The Wardrobe
By C.S. Lewis
I first encountered the wonderful world of Narnia during story time at school. Could even have been the start of my love of fantasy. Enough said...

Fantastic Mr Fox
By Roald Dahl
This book is as old as I am. Although the edition I had was from the Puffin print a few years later. We had the Puffin book club at school where parents were encouraged to buy books from a small leaflet which we brought home every few months. I think that was where my Spike Milligan Silly Verses also came from. There were a few Roald Dahl books, I also have fond memories of 'The Magic Finger' as well.

Twentieth-Century Short Stories
By various authors
The Machine Stops, by E.M. Forster, Odour of Chrysanthemums by D.H Lawrence. The Destructors by Graham Greene and The Lumber Room by Saki are the stories I recall in this collection which was part of our 'O' Level English course. There was beauty in the bleakness that Lawrence wrote, but just do not get me started on the farce that was our English Literature class. That is another story in itself.

Another point to mention, was that my next-door neighbor also grew Chrysanthemums and so as I child I knew their scent every year when they bloomed.

Ninety-Nine Dragons
By Barbara Sleigh
A young boy goes to bed, but rather than count sheep he counts dragons. Just my sort of thing and something I could imagine doing on those summer nights during the summer holidays as a child when I couldn't get to sleep.

At the end of the assignment I’m supposed to nominate other friends to do the same. But I’m challenging you my reader, if you made it this far try for yourself to think over those books that have some significance to you.
Posted by DJ Kettlety at 22:26 No comments:

Marc's Walk for our Furry Friends

Has everyone finished throwing buckets of water over their heads? Yes? Good. Now can we have your attention please? To paraphrase what they say on the BBC, “Other charity events are also available.”


Marc, a long time friend and editor on the Karl trilogy, is endeavouring to walk 100km in a 24 hour period as part of the Thames Path Challenge in September. He will be walking to raise money for the Celia Hammond Animal Trust.

This charity walk/run takes place over a 24 hour period and goes from Putney Bridge to Henley over weekend of the 13th/14th September.

As far as I know he is the only entry raising money for Celia Hammond at this event.

He has chosen this charity because of the special care they provided for the boys during their lives, two little furry fellows commonly known and Bertie and Pilch. (You can find out their full names on his JustGiving Page where you can also help by sponsoring him. You can read more as well on his Facebook Event page)

I absolutely adored these two, and so did everyone else who met them.

Celia Hammond Animal Trust run clinics in Canning Town and Lewisham, and have a sanctuary in East Sussex and a branch in Tunbridge Wells. They provide refuge for cats and kittens who for various reasons cannot be taken elsewhere. Provide low cost neutering and veterinary services for those for those unable to afford private veterinary bills and do not qualify under other charities, and help rescue and re-home animals in need, amongst other things.

You can find out a lot more about them by visiting their website:   http://www.celiahammond.org/

Some of you will already have seen a photo of Bertie in the past. On occasions when Marc was away the boys would come to stay with me. Even after Pilch had passed away Bertie still came to me for his holiday and on one occasion took up editing duties on book 2 of the Karl Trilogy.

Until recently the internet was only good for one or two things, cute cat pictures being one of them. So here I present some cute photos of the boys along with some fond memories I have of them. I know there are plenty of warm, loving, affectionate little critters out there, but in my experience I have never met another pair like them.

Or you can text your donation by sending a text with the code MMCH69 and the amount you want to donate to 70070.

I remember one time staying over at Marc’s, whilst selling my flat and buying a new place. Now selling and buying is very stressful. The woman I was purchasing from phoned me on the Saturday morning and practically screamed at me that she had heard my buyers were pulling out – which was complete rubbish. As a result she would be pulling out and was going to put the place I was buying back onto the market. After the call I was on the point of cracking, two little furry heads appeared at the window – they had gone out to play earlier – and within seconds they had both bounded over to give me kitten cuddles.


Derek, Marc, Bertie, Pilch, Karl & everyone in Miltonburg & Esmay
Posted by DJ Kettlety at 20:55 No comments: