I’ve managed to find a few minutes this week to actually glue some sticks to some foam board. Miracles happen in small doses once in a while. I’ve covered one side of each of the small shack buildings I started earlier in the year.  The aim with these is to keep them simple, rough and ready. They will be the outskirts of town buildings, and I’m going to build them in pairs one slightly smaller than the other, this is to aid storage, as I’ll sit one inside the other in their boxes. 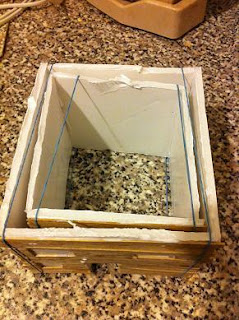 The roof sections will also be made separately so that they can be stored easier and maybe if I plan it right, they may also be interchangeable to some degree just for a bit of variety.

It's been an odd month as far as theatre trips have been concerned, although none actually blew me away some were good, whilst others stood out as being some of the worst I’ve seen in ages, and that is saying something. I don’t usually post negative reviews but to balance the good ones this month I’ve provided a personal view of all five productions I’ve seen in January. 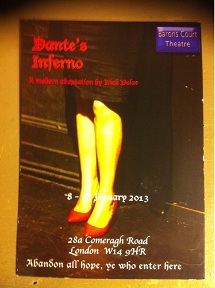 Three short plays loosely based on three of the themes from Dante's Inferno: lust, gluttony and wrath. The second play' was a five minute scene of a guy in a fat suit eating crisps. The first lust, written by one of the performers did nothing to convince. Two lesbian lover prostitutes pick up Jack the Ripper as a client, sorry for the spoiler but it was so badly telegraphed I felt like groaning at the revelation. Unfortunately, the fact that neither of the girls could bring themselves to look at each other during the performance left it inconceivable that they were lovers in lust with each other. I've seen more love between two straight manly men on rival sides at a football match.

A two hander set in a non-described basement, a play from the pen of Pinter. This one act play managed to keep your attention and built the tension well with both humour and menace. Full marks to Clare-Louise English and Maggie Valois as the two hit men. 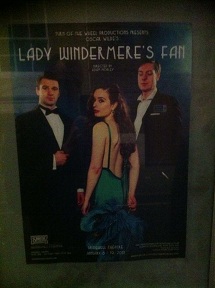 A play from Oscar Wilde revived at the Bridewell Theatre. Not essentially one of the best know plays by Wilde it still retains the ability to entertain today and provides a subtle twist that demonstrates why Wilde is held is such high regard. An entertaining evening, and one of the highlights of the month. The set was basic but worked very well with changes of lighting and an enthusiastic butler showing what can be achieved with limited resources. The off stage lighting for a fireplace worked well, creating the required ambiance and function for the story, and succeeded in expanding the illusion of the size of the stately homes.

Every Man for Herself
Courtyard Theatre
(16th January 2013) 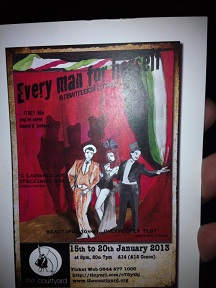 A simple plot, performers in war torn Italy, performing in a cafe decide to escape dressed as women. It was basically painful. The theatre audience were used as the audience of the cafe, with an opening appeal for applause before the performance had even started - this felt like an act of desperation. It might have worked if we had been sitting at cafe tables. The first act was basically the plot, the second act a string of numbers from the escapees in drag starting in English and each one dropping into (I'm guessing) Italian, which was lost on the majority of the audience. 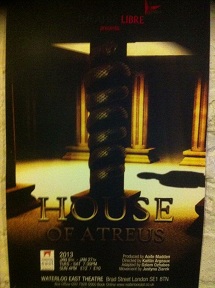 Orestes, returns to his homeland to avenge his father's murder. For me an average production with some questionable decisions regarding staging. The women were costumed, however basically but they did at least provide a feeling of a bygone period. The two guys looked like they had just wandered in off the street, the hero of the play dressed in leather jacket and hoody. I've seen very conflicting reviews of this play, one described the tango performed by the wicked mother and her new lover as being brilliant, personally I felt it was out of place and would certainly have been panned by the critics on Strictly Come Dancing as laboured, clumsy and awkward. Although I'm not one to deliver spoilers, when the revenge attack does take place it is poorly lit performed behind a muslin cloth, it neither works dramatically nor artistically. 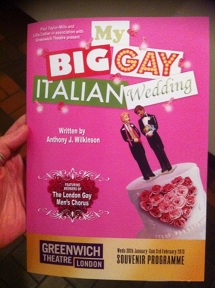 Described as a "music and dance filled extravaganza", to be honest wasn't really. The majority of the music and dance took place either before the show started or shoehorned into the second act, and can I go on record to say I HATE "gangnam style" and the inclusion of this number made me shudder. Other than that it was ridiculously funny, at times hilarious and so over the top it managed to comeback down again the other side.