As this is probably my last post before Christmas let's have a few mumblings on the subject. 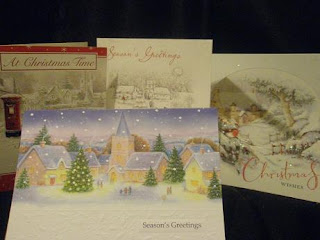 There is a lot of debate these days around Christmas cards, the cost of cards, cost of postage and the save the environment bandwagon, but I bet those people who use that as an excuse not to send cards still make more than their fare share of rubbish for the next bin collection over the festive period.

Personally I still prefer that personal touch of a card written / scribbled (delete as applicable) by hand.

The designs vary from festive, wintry scenes, jokey and religious but this year I seem to have received more scenic and olde world house cards than usual.
I'm thinking some family and friends may be secret readers of the blog, if so thanks very much. These cards will be added to my folder for ideas for next year, especially these two cards cut out in house shapes. I'm already thinking of building these two as models next year. 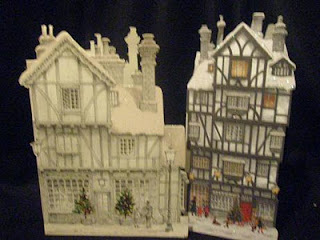 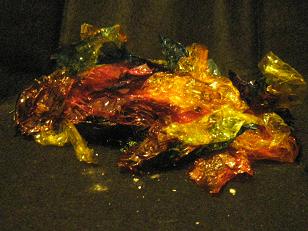 It's the season to over indulge on sweets, mince pies and numerous other treats. After munching my way through these I often then start examining the packaging wondering what can be made from them. Some of the things I'm planning on keeping hold of are any coloured transparent wrappers from a well know sweet assortment, these are good for coloured effects on fire places, windows etc.. 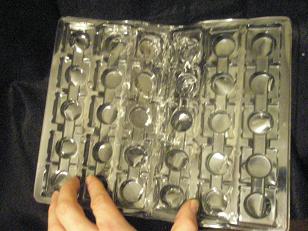 I’ll be collecting some trays from mince pies, chocolates, and biscuit assortments, as these I've started using as short term plaster moulds. These columns I made by taking a casting from a sweet tray, only filling the cup parts to form the round stones I stacked up to give the pillars some height, whilst I filled some of the indents fully to make the bases with pillars. Let’s see what this year’s trays inspire. 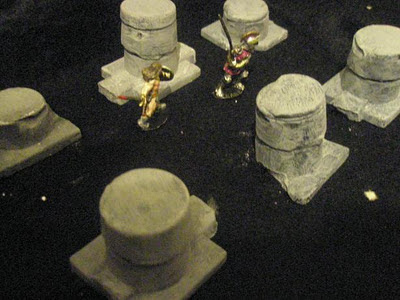 I was going to leave it until next month before featuring more of the tapestry but with today’s news it seemed just right to feature a couple more photos of this massive project.
Exciting news for Doctor Who fans broke today with the announcement that two episodes missing from the BBC archives have been uncovered. Episode 3 of the William Hartnell adventure "Galaxy 4" and Episode 2 of Patrick Troughton's "The Underwater Menace" turned up having been bought by a private collector in the 80s without knowing the importance of what he had found to the world of Doctor Who fandom. Personally I never believed that any more of the missing episodes would show up, so I’m looking forward to a commercial release of these hopefully sometime next year.
More details can be found on the official BBC Doctor Who website 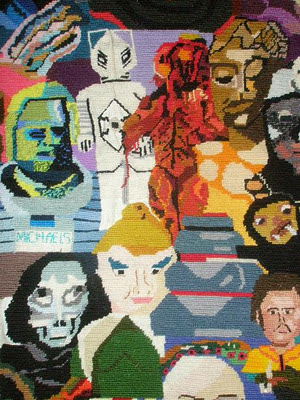 Galaxy 4 from 1965 featured the beautiful Drahvins and the hideous Rills and cute robots the Chumblies. Although all was not as it first appeared.  I’ve already featured a Drahvin and a Chumblie on the tapestry seen here alongside some other early enemies, Axons, White Robot, an Ambassador of Death, and the robot disguised as Death from The Visitation. 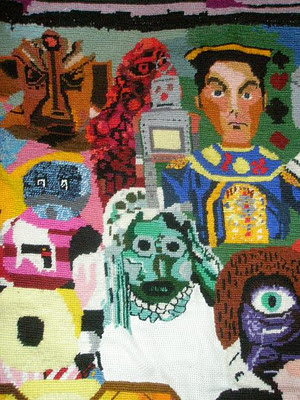 The Underwater Menace from 1967 featured an adventure in Atlantis with ‘fish people’ which I’ve also added to the tapestry some time ago. Seen here along with a Monoid, the Candyman, Toymaker and Robot, Gell Guard and Silurian.
Posted by DJ Kettlety at 20:18 2 comments:

Email ThisBlogThis!Share to TwitterShare to FacebookShare to Pinterest
Labels: Doctor Who, Tapestry

Doctor Who Tapestry/Embroidery Part One

Still on the subject of arts and craft but somewhat off topic regarding the model world I’ve been building, but this is another ongoing project that I’ve been working on for many years and a few people who know me have been asking how it’s going. I guessed this was probably the best place to show pictures of how it’s coming along.
Ok, some background to the project. 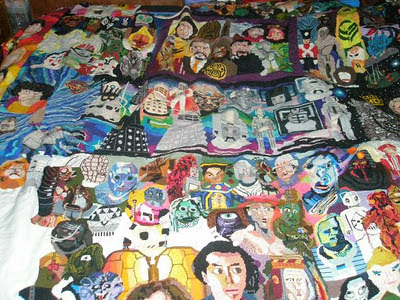 I started this many years ago, initially as individual tapestries/embroideries of each of the classic Doctors from Doctor Who, and this was started before the Paul McGann tv film. Each of them was going to be framed, indeed the first three finished were. Then I had the brain storm of joining them together in one piece, but the backgrounds did not merge together and needed something to join them. I then decided if I was going to do that then I should add companions and monsters into the mix and very soon it grew as new pieces were added. 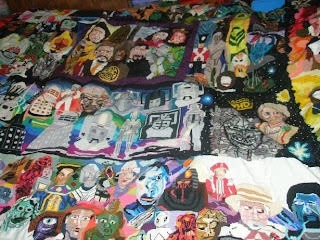 When the Eighth Doctor came along I had already got the design in place with the first three Doctors along the top, Four and Five on the sides in the middle and Six and Seven at the bottom. Number Eight threw the design out a bit and had to be added in the middle.  I’ve decided that this work will only cover what is known as ‘Classic’ Doctor Who, and I do have another large piece of material ready for the new series once this piece of work is finished. (If it ever gets done.)
At the last measurement it was over six foot square, hanging off the sides of a king size bed.  Here are a few photos of some selected panels, there are several areas still under construction and many parts that need to be finished or revisited as I’m not entirely happy with them yet.
Some individual panels :- 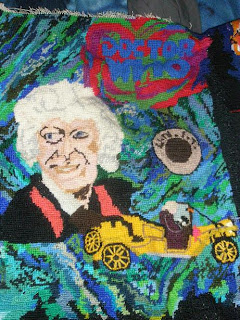 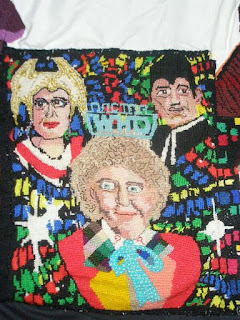 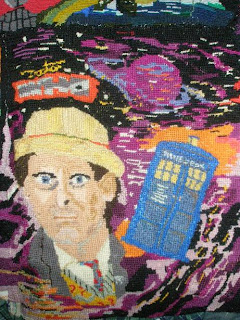 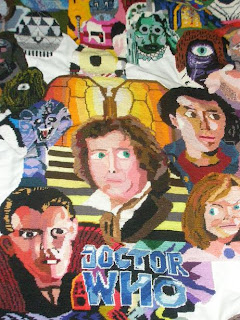 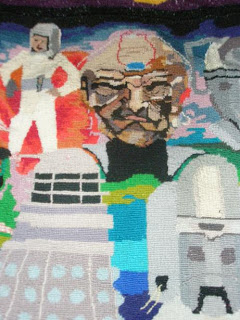