Zandina's House - The Windows Are In. 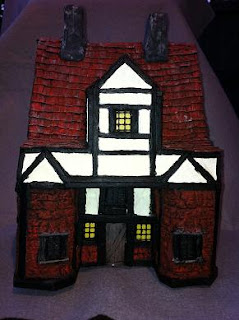 I promised to post this week about the windows on Zandina's House, as I have a better way to create the leading effect after last year's attempt with fruit bag netting. This looked ok but because of the stretchy nature of the material, keeping the same shape and consistency of size of the gaps was tricky.

Whilst wandering around one of those pound stores (other low price denomination shops are also available) that proliferate around Romford, I found something that caught my eye.

It wasn't in the toy section, stationary or even DIY. I found this in the baking department; it's a non-stick, cake cooling tray. 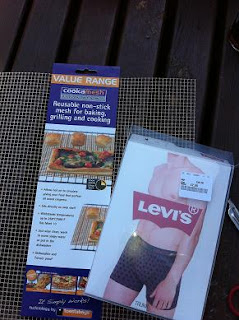 Up close and personal it looks like weaved squares. I bought one, took it home, didn't do any baking with it, instead I cut it into small squares and painted it black. Despite being non-stick the black acrylic paint took quite well.
So these small squares cut to size will be the leading. I then took the plastic box I used last time from the underwear packaging and cut that into small squares to fit inside the windows.
This is very rigid plastic and just slightly opaque so it gives the dull window effect rather than being too see through to the painted card underneath. 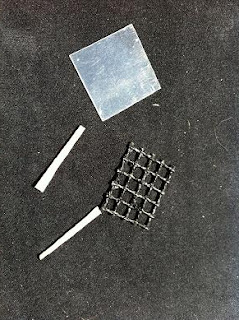 Some of the windows I wanted to have a 'lit' feel, but not with actual lighting. I tried a couple of colours for these windows first, eventually going with a ‘butter cream’ and ‘yellow’ mix, which I think gives a warm glow through the plastic windows.

With the windows painted either yellow/cream or black, I placed on the plastic then the painted tray cut pieces and finally held the lot in place by inserting a very slim frame cut from  the coffee sticks, about a third width, and stuck in.
This gives an inner window frame as well as the main frame work. Then the additional frame was painted black and a few touch ups made to the leading. I’ve got some finishing off work to do but at last I feel that I am making progress with this model. 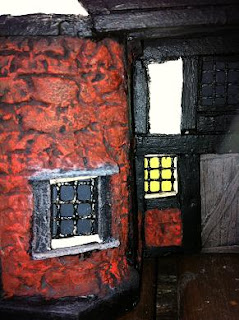 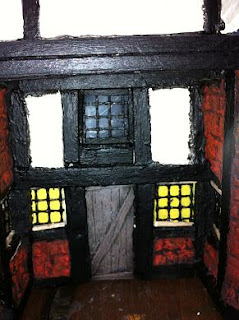 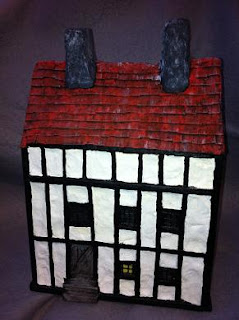 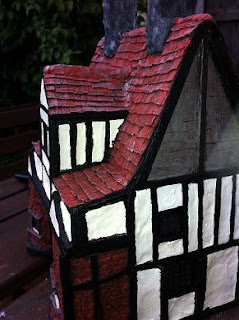 Oh yes, this posting's short teaser from Karl's story...
Instinctively Hermer obeyed, trembling he extended his right hand, palm upwards before the templars. Their leader dropped what appeared to be a coin into Hermer’s hand; but it was not a coin that was acceptable currency.
Hermer screamed as the coin burnt into his hand, he tried to drop it but it had adhered to his flesh. Wisps of red smoke trailed out as the coin burnt him. Lugger made a grab for the coin, but a swift blow from one of the morning stars held by another of the templars sent him sprawling backwards.
Posted by DJ Kettlety at 21:51 4 comments:

Been a bit distracted.

Sorry I've been a bit quiet these last few weeks, been a bit busy and not with model work, and I didn't want to deliver too many off topic postings, so I thought I'd do one quick round up now and promise that the next posting will be a model work one and quite soon. 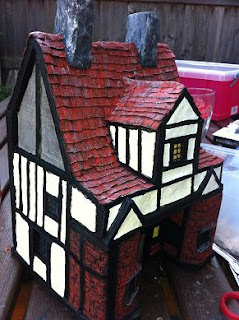 As I said not much model work, only some of the painting on Zandina's town house which features in the Karl story. Although today I did get started on the finishing work on the windows, and it will be this work I'll be blogging about quite soon. Some of my time has been taken up with the book, and the sequel. My main aim at the moment is to get the full draft copy of the second together by the end of June. I also have quite a bit of spring cleaning to get done as well.

Most of last week was spent posting teasers from the original on Facebook; I thought that I had hassled you guys about the book enough for a while. But I did get an odd comment the other day, “I really liked how you made me wonder what the mystery behind this character is. You should have given us a little bit more insights though.” I would have hoped that if you were that interested you’d order a copy otherwise if I posted the whole story here there wouldn’t be any point in the book.
I will reproduce some of the teasers here. 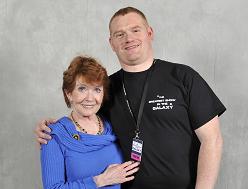 A couple of weekends ago I was in Peterbourgh for the 'The Greatest Show in the Galaxy', a collection of Doctor Who stars past and present, Torchwood, Star Trek DS9, and Spooks to name but a few. I was there as part of the crew rather than an attendee. The Saturday was more of an odd job day for me, but Sunday I had the delightful pleasure of assisting Deborah Watling (Victoria from the 1967 to 1968 series with Patrick Troughton's Doctor). The irony is that I reviewed Deborah's autobiography on here in February. I remember giving it a very positive review. 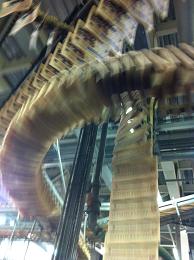 A couple of nights ago I also took a tour of the print site where the FT is printed. That was a fascinating experience, watching the printing plates emerging from the laser etcher and then watching the pages come through, and the work to balance the colour and alignment can only be described as an art form in itself.

There have also been a few other theatre trips as well taking up my time, again I did not want to turn this whole blog into a review blog so I didn’t post every one. Hopefully with the weather improving I’ll get some time to use the table in the garden and get some model work done soon.

This was last Monday’s teaser, I will include another with the next posting.

She was dead.
No, you cannot see your own grave. But it was true; both names belonged to her. Had belonged to her. It had to be true. And was that Karl again? Who were the others - Thomas, Hanna and Katarina? ...

The other day my old mate over at BigLee’s Miniature Adventures  wrote a list of all his model work that he had to do, for a moment I contemplated that, but I think I would have to put together many lists and then generate a list of lists, what with the many projects I have on the go. Instead of spending time writing all these lists I should just try and finish one thing at a time. The high level lists would be something like this:-
Finish Karl – The Lost Adventurer (Book  2 of the Karl trilogy, actually nearly finished)
Karl – The Conclusion (Title under wraps for the moment, plotted out)
Models based on Karl’s story.
Paint figures for Karl’s story.
Models for the Supernatural game
Paint figures for Supernatural game.
Learn the rules for Supernatural game.
Finish the special project for our D&D ‘Evil GM’s campaign’
The Doctor Who tapestry
The New Who tapestry (Not even going to start this before the other is finished)
And so on and so on, and under each would be a whole list of models, figures and related tasks that would test the scroll bar limits of any web browser. 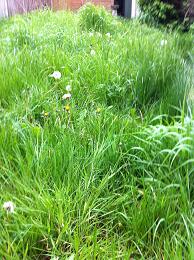 Top of the list would have to be some house related jobs as well, the garden being one of them. But the grass grows rampant as the rain continues to fall in the wettest drought we have ever known. From the moment The Powers That Be announced a drought and a hose pipe ban it has NOT stopped raining, to finally ending up with the wettest April since the last wettest April we have had since somebody decided it had been a wetter April than the one before. Get it? Good, I don’t need to go on then.  Here was the local weather forecast from today and tomorrow, the wet part kept drifting down time bands all day. 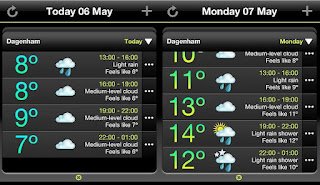 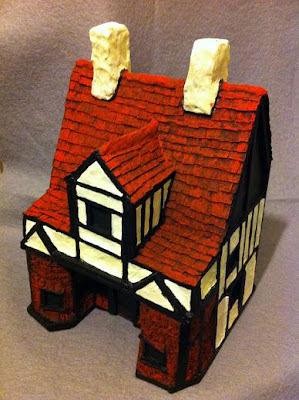 The one thing I did manage to do was most of the black work on the wooden frame for Zandina’s house, all I need to do now to finish this is:-
The white dry brushing on the roof.
The shading on the side wooden panels.
Pick out some brick work.
The windows.
Grey mottle the chimneys
Shade paint the doors,
and finally the leading on the windows which I have a new idea for which I’ve been experimenting with and can’t wait to add as the final touch to this building. 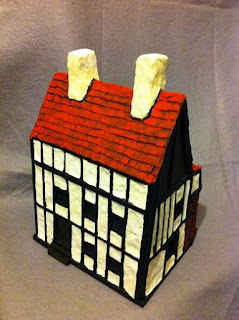 Theatre review.
The Custard Boys & What The Butler Saw

I do get to see quite a number of theatre shows, but I’m not going to be reviewing every one. Every now and then one or two come up which I think should be recommended and just recently I’ve had the pleasure to see two such shows. 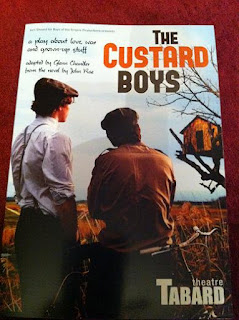 THE CUSTARD BOYS,
Tabard Theatre, 2 Bath Road, London W4 1LW
Boys of the Empire Productions
Based on the novel by John Rae
Adapted and directed by Glenn Chandler
10 April - 12 May 2012
The Custard Boys is promoted as “A play about love, war and grown-up stuff”, the story of a group of boys evacuated to Norfolk during WW2, it follows their adventures and misadventures when boys will be boys and have a lot of growing up to do. My mum, uncles and aunts was evacuated to Norfolk at the start of the war so this had an additional poignant significance, but I’m sure they never got up to these things. When a new boy is introduced to the mix, neither local nor one of the London evacuees a whole new set of emotions are awoken.
Performed on a small intimate stage this is a powerful and emotional production, with a strong performance by the entire cast of seven young actors, all of which I would expect to see going on to bigger and greater things. If you’re in the area this is certainly one to catch.
Follow the links for more details,
http://www.tabardtheatre.co.uk/
Boys of the Empire Website is here:
http://www.boteproductions.co.uk/ 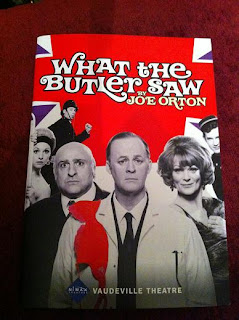 WHAT THE BUTLER SAW by Joe Orton
Vaudeville Theatre, The Strand, London
http://www.whatthebutlersawtheplay.com/
Does this play need any introduction? The third of Joe Orton’s three farces written not long before his untimely death at the hands of his lover in 1967 and first produced in 1969, this has to be one of the funniest plays I’ve seen in a long time. Just starting a new run at the The Vaudeville Theatre on The Strand staring Omid Djalili, Tim McInnerny, Samantha Bond, Georgia Moffett, Jason Thorpe and Nick Hendrix. Completely un-PC this play welcomes you to the world of psychoanalyst Dr Prentice where just about everyone should be committed to the madhouse as from a simple mistake (Dr Prentice tries to seduce his new secretary) all hell breaks loose.
Let me just say this was only their second night and I left at the end with tears of laughter still rolling down my face, so sit back and enjoy. Very much a must see.
Posted by DJ Kettlety at 00:21 1 comment: