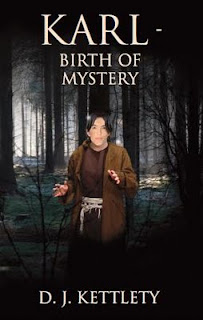 After a bit of a delay I can finally announce that the first volume of the Karl trilogy has gone live on the Kindle. Other formats may follow in the later part of the year, at the moment the e-book version is exclusive to Kindle.

A provisional schedule is set for the other parts of the trilogy,  and will be announced here soon.


The uncertain future of 100 Publishing has meant a little re-think in the plan. However in the meantime paper based copies of the original are still available through the links on the right, direct from me via the 100 Publishing website, or through Amazon Market Place.

Signed copies are also still available from 10th Planet Events - link is also on the right.

Oh and BTW... You don't need to own a Kindle to read Kindle books.
You can download a free app to your laptop/pc,  iphone/ipad etc. from Amazon
And, as if that's not enough Amazon Prime customers can rent a number of titles for free,
Karl - Birth of Mystery included.

Only three visits this month, and what diversity...
Early on in the month saw two quite crazy productions come my way. 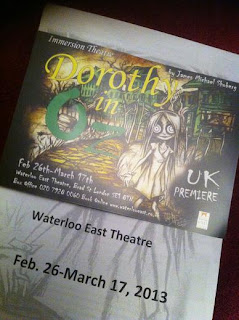 Coming with a warning that it was not suitable for children should give you some idea what might be on the cards. Set in the facility for mental illness, ‘The Ozlin Centre’  this play made no excuses for itself. A brilliant parody of the Wizard of Oz, with Dorothy having to escape from the centre via the Great Administrator Oz, having been put in the care of the wicked witch of a doctor by her Auntie Em. On route she meets up with Tin Man who has anger management issues, Skarekrow (with two Ks) the junkie and Lion Man with sex addiction and performance problems. Very funny, the only issue was the Tin Man was styled too heavily on Adrian Edmondson's Vyvyan from “The Young Ones”. 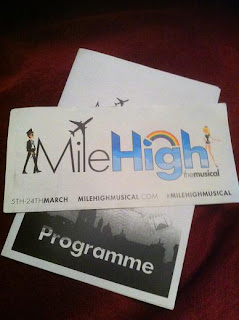 Two rival airlines in a battle to win the coveted title of Mediterranean Small Airline of the Year. One a cheap budget airline (Icarus Royal Airline ) and the other a snobby business class over priced airline who usually win. A pair of Kylie’s hot pants bought on Ebay is bet against a date with the steward of the high class operation (Fantasy Airlines). The main story revolves around the Richenda, the hostess who has never known her father and would rather be a pilot.

The audience had great fun and everyone seemed to really enjoy the show with enthusiasm and the only fault I’d pick out is that the cast should have been miked up rather than rely on a couple of free microphones.

The review for Mile High in The Stage was very harsh and I have to disagree with them entirely, it was a good evening’s entertainment. However I’m in total agreement with their review of the big West End Production of Viva Forever. 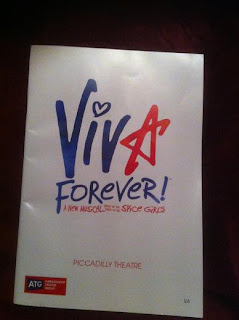 A New Musical based on the back catalogue of songs from The Spice Girls.

Now I’m not the biggest Spice Girls fan, but the songs I do know are great party numbers and so I was prepared to give this a try although this has now firmed up my misgivings for shows that take a catalogue of songs and try to shoehorn a plot around them. It generally does not seem to work, there are just a few exceptions.

The plot was weak, a parody of X-Factor called Star Maker would have been funny ten years ago, but these shows have become a parody of themselves – you only have to watch the Twitter feed on a Saturday night to see that.

And speaking of which, to encourage the audience to Tweet throughout the show is in my opinion a great big NO NO!!!

It was a pity, the script was written by Jenifer Saunders and I hoped for much better, but the characters were a poor man’s left over from “Absolutely  Fabulous”. Mum was too much Edina, mum’s best friend was a poor Patsy and even one of the judges had an assistant that was Bubbles. No originality there then.

The best parts of the show were when the full cast and ensemble took to the stage and performed the well known numbers, they sang and danced like troupers and full marks have to be given to them, but for the rest it just did not work.
Posted by DJ Kettlety at 08:00 No comments:

Not a lot to say about these at the moment just thought you’d like to see some progress on them, albeit a slight one. At least working on the roofs separate from the buildings does make clamping them a little easier.

Currently working on the sides of the roofs and starting the beams as a top layer on the main buildings. 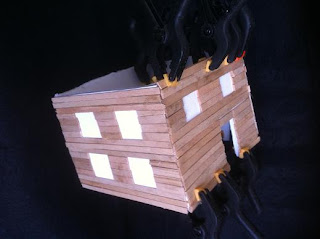 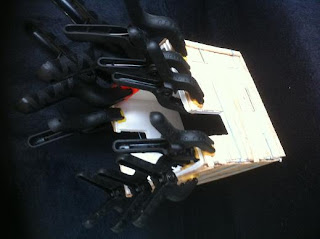 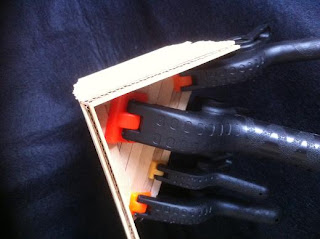 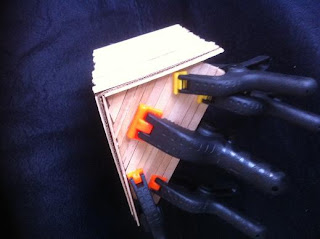