These coffee sticks are everywhere. 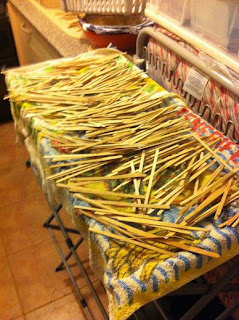 I’ve let things slip recently as far as the model making has been concerned, and suddenly I found myself swamped with coffee sticks.

This weekend saw a mass washing and cleaning session, but without the warm sunny days of summer I now have coffee sticks drying all around the kitchen.
I’m going to start a quick knock them together project to build a couple of old shacks, mainly to get some used up. Working on models like this they can be as rustic as they like. 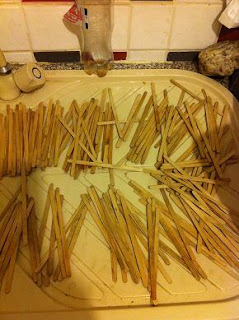 I’ve used foam board this time for the frame work rather than recycled card boxes, mainly because the foam board will be sturdier, and thus easier and quicker to complete. 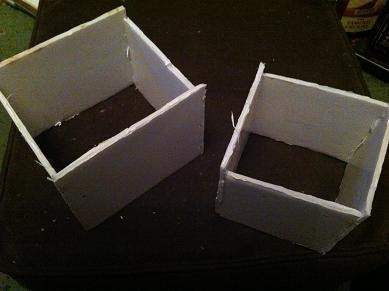 MotorMouth in the snow

"Janet Fielding has a new fight on her hands not against the Daleks or Cybermen but against cancer. Peter Davison has swung into action and enlisted the help of his fellow Doctors to launch Project MotorMouth. It will not only raise money for a good cause but also keep Janet's spirits up."
Project MotorMouth Website.
http://www.projectmotormouth.org.uk 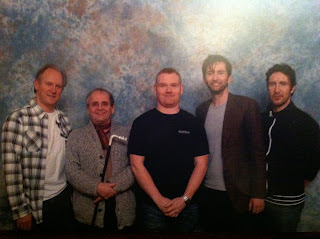 Last weekend I took a trip to Slough, Friday was one of those snowy days in the UK which we have trouble with. Even the threat of snow causes most transport networks to throw their hands in the air and cancel services before even the first flake falls. So it was with some surprise that I made it to Slough station on Friday afternoon, but it was no surprise to find that buses and taxis had given up and gone home. So with iphone navigation myself and another poor bugger I found stranded at the station began to navigate a treacherous route by foot to the hotel. Fortunately I made it there alive.

Even more fortunately the weather improved for Saturday so the majority of the attendees made it, along with all the guests with the exception of poor John Leeson who found himself stuck in Hamburg, due to strike action rather than foul weather. Full marks also go to Colin Baker, who was rehearsing in Lincoln in the morning due to commitments he had to his touring play (The Lady in White), but still came and signed for everyone when the easy option would have been to have cried off.

As crew I had a delightful time in the morning as PA for Simon Fisher-Becker (Dorium in the previous series), and the line up of Doctors was quite an event, with Doctors 5, 7, 8 & 10 on stage together. A good sum was raised in the auction for the MotorHouse project (*) - a project to renovate West Cliff Hall in Ramsgate being championed by Janet Fielding as part of her recovery therapy. It seems to be working as Janet was in fine form Saturday.

For more details of the project and to donate direct you can visit the project's website:
http://www.projectmotorhouse.org.uk

There is a second event planned for August, this time driven by companions rather than Doctors, I'm sure it will be a great event and there are still a few tickets left. For more details visit...
http://www.tenthplanetevents.co.uk/conventions---project-motor-mouth-2-622-c.asp


(*) Motorhouse is the project to renovate West Cliff Hall in Ramsgate, MotorMouth is the name for the fundraising done in Janet's name, as Tegan was known as 'The Mouth on Legs' during her time in Doctor Who.


Details of Colin's tour can be found here:
http://www.freewebs.com/colinbaker/latestnews.htm
Posted by DJ Kettlety at 14:29 1 comment:

In my last post I mentioned the influx of non festive post that I had received, along with the somewhat lacking level of customer service I had received. That level of poor customer service continues into the New Year, so don't be surprised when in the near future I rant again. However, one of the other letters I did receive was a begging letter from a monkey named Joey.
As readers of my semi-regular missive may recall I occasionally visit Cornwall, earlier last year I was down there whilst working on the Karl novels. During this trip I visited the "The Monkey Sanctuary", along with some friends who already sponsor a monkey or two there.

The letter I received was well written, in fact many humans could take a lesson or two from Joey's writing style, grammar and use of punctuation.

Joey is a Capuchin monkey who was taken from the wild at three months old, kept in atrocious conditions at a pet, which resulted in him being permanently disabled. He was rescued by 'Wild Futures' who run the Monkey Sanctuary in Looe where he was nursed back to health, but he will always need care along with many other monkeys that were rescued from similar fates and cannot be returned to the wild. 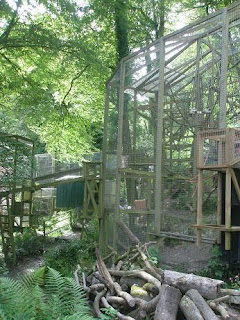 Stephen Fry tells Joey's story much better than I could here in the video recorded for the sanctuary, and available to view on their website.
I have supposedly saved myself a small sum of money from my recent move of services, (not a headline saving as some money advice sites would trumpet) but that was not the driving force for the move. So I've decided to use some of these funds for the adopt Joey scheme.