The last few weekends have been given over mainly to work on the tapestry, having started to compile the galleries by season and working out just how many additional characters and stories I want to include means I have to give as much spare time to this as possible. 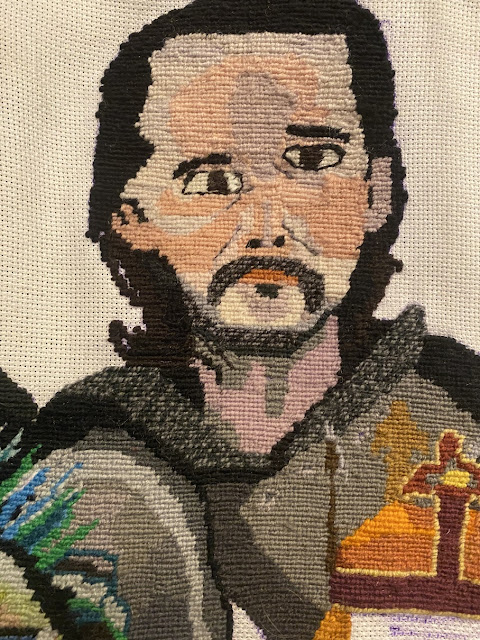 I’ve just finished Mordred, next I need to complete work on Morgaine, both from Battlefield. I’m also intending to add Ancelyn to complete King Arthur trio of characters that appeared in the story. If you’re wondering about Brigadier Bambera, you will find her on the special panel dedicated to UNIT alongside Leithbridge-Stewart and co.

Also this weekend I released the first two gallery pages based upon my audit of ensuring each story from the classic era is represented. The gallery pages cover the first two Pertwee seasons, Season 7 and Season 8. You can find them by selecting the Adventures with the 3rd Doctor page on the navigation bar.

The Mind of Evil is in need of representation, any suggestions on who or what would be good to include specific to this story?

I’m off to do some more stitching…

The Story of the Doctor Who Tapestry (Part Four)

I often get asked the same questions regarding the tapestry: When did you start it? How long have you been doing it? It’s not actually that easy to answer because it has not been a continuous activity. But let me wind the clock back and try to provide some answers. (Parts One, Two & Three here)

Of Time Lords and Twilleys

Another of the questions that I get asked is about what sort of wool I use: Will any wool do? Well, chunky knit certainly won’t. Working on the project over the years I have used mainly three brands, initially when I first started it was Anchor tapestry wool, it was this brand of wool than mum first used when she did her first tapestry kit that I mentioned in part one.

I had a basic range of colours and you will notice in the earlier work that there is much less detail and less shading. An area was filled with orange if that was the main colour because I would have had one skein. There was a small wool shop local to me that stocked tapestry wool but it wasn’t Anchor it was Twilley’s. They were also being sold off, so I started to stock up, although the colours were mainly purple, mauve and khaki green. I had to find a way to use this wool.

This is why the Time Lord section that came next has the border around it. I made a hard edge, meaning no need to blend backgrounds but also allowed me to use the cheaper wool I had bought.

I discovered that Twilleys wool has some advantages over other brands. First the skeins are larger, (although I later found larger skeins of anchor too) they are pre-cut lengths but they also unravel a lot easier. They are three strands that can be untwisted to make the wool thinner for some applications but it also means you can then use different colour threads together. The one disadvantage was their more limited colour range, far less shades than Anchor or DMC.

This helps a lot when you are stitching something that needs a mottled look or for chain mail. It is much harder to split the other brands.

Roll forward a few years and I started to add DMC to the mix too. I don’t see any disadvantage in mixing the brands, in fact it helps me blend colours now and shade. Using the tighter Aida than I first started with and having access to so many shades means I’m a lot happier with the later work but also makes me less keen to show the earlier parts.

When I said I had access to all shades, I now have an entire cupboard full of boxes of wool since I bought up all the stock from the local Hobbycraft when they sold it off at 80% discount when they stopped selling tapestry skeins. Later I was again very fortunate in 2019 when a local charity shop had a few cases donated; they were initially bagging them up a few at a time and selling them. The poor staff believed they would be bagging up these skeins for life and would never see the back of them - but when I bought all they had on display they almost jokingly said at first, "Would want to buy the lot?" Well, no joke, a deal was struck and there were smiles all round. I mentioned this back in 2019

I think I now have almost enough wool to finish this project and maybe the New Who one, should I live that long. I do still need to top up from time to time, usually black and white but it is harder to find suppliers, this seems to be a dying craft.

Next time I’ll talk about how I started to tackle the "Wilderness Years" and then the coming of the Eighth Doctor.

Celebrating Season 17 boxset across the tapestry

To celebrate the release of the Doctor Who Season 17 boxset last year, which I have almost finished watching, here are the sections of the tapestry where Season 17 stories are represented. Well, all but one. I appear to be missing "The Creature from the Pit". I am so looking forwarding to adding a green phallus to the tapestry. 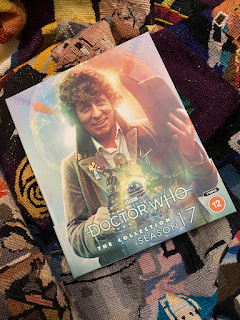 The majority of the characters stitched here were done quite early on during the expansion of the tapestry and are not as detailed as later work like the Ancient One from McCoy’s "Curse of Fenric". In some cases I think I will revisit a couple of these and try to improve them before declaring the whole project complete. 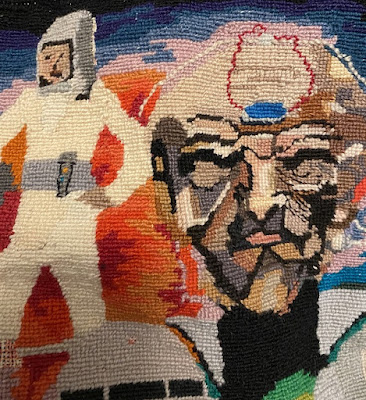 Season 17 opened with "Destiny of the Daleks". Here are Davros and a Movellan. I’m pleased with Davros but the Movellan could do with some extra detail. (1st Sept 1979 – 22nd Sep 1979) 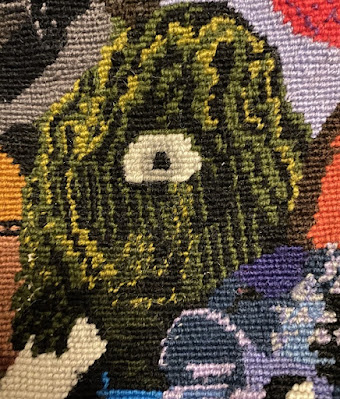 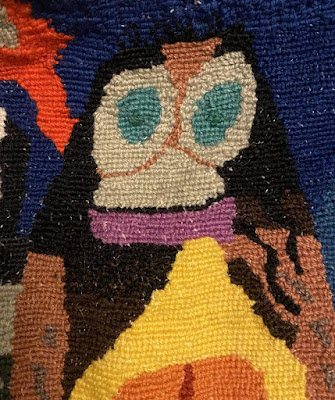 Following on was "Nightmare of Eden" (24th Nov 1979 – 15th Dec 1979) Here I have a Mandrell, also an early effort and in need of additional work to bring it up to the current standard. 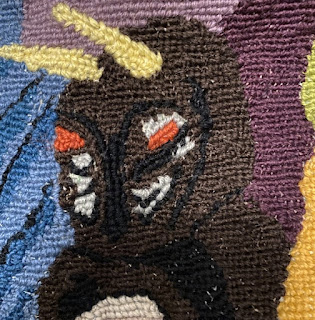 The last story of the season, never finished at the time because of a strike at the BBC and subsequently released with the missing scenes animated, was "Shada". This is a far more recent effort and has much more detail for Professor Chronotis, the sphere and a Krarg.