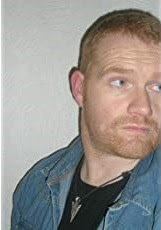 D.J. Kettlety has spent the last thirty something years working in IT, and escaping off to his own little fantasy world whenever he can.

This escape has resulted in The Karl Axilion Trilogy, a project that has been brewing for some time and finally erupted into an actual series of books. The trilogy is now complete and available.

Although this is a big weight off his mind, other tales have hurried in to take the place of Karl and new characters are once more fighting their way onto the page.

(Hint: this time it includes werewolves.)

Originating from Dagenham, yes that place where Ford used to make a lot of cars, he spent his early years in amateur theatre before deciding that it was time to move on to something else - his last role included being covered in cold vegetable soup, pretending that somebody had been sick down him.

When he is not doing the day job in IT or writing the adventures of Karl Axilion and friends (and enemies) he builds scale model buildings often from any old pieces of scrap material found laying about and stitching a huge Doctor Who tapestry, dedicated to the classic era. He intends, one day, to start another for the new series post 2005.

These things he will often blog about along with book reviews, news about Karl & co, theatre reviews and anything else that comes to mind.