So that New Year’s resolution goes out of the window, well, sort of, the one where I was determined to post more updates this year. There again, there has not been much progress in the last few weeks to speak of.  A busy couple of weekends left me with little time, and this week I managed to either trap a nerve or pull a muscle in my back which has left me pretty unable to do much. Before anyone asks, no I was not building a full sized house, swinging from the light fittings or anything else adventurous or suspect – I simply turned to speak to someone whist seated. So there you go. Anyway let’s get this actual post done before the pain killer wear off. 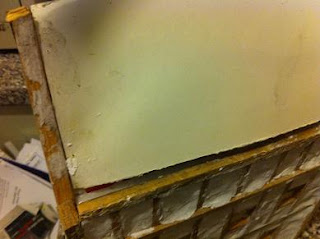 What I was going to talk about last week was Zandina’s house. I had decided to get some tiling done on the roof, when I unboxed the model and realised just how unhappy I was with the roof in general. There was a gaping hole along the edges, the roof itself was too much sunk in, so before tiling could begin some redial work had to take place.

I glued some more card inside the roof cavity to bolster up, and hold down the flapping roof edges, and added additional layers of card over the top of the existing roof to raise the level nearer to the side beams. 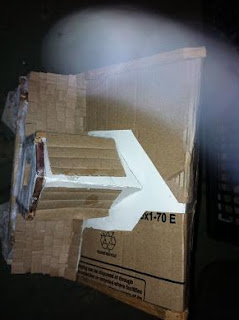 I even had to raise part of the side of the porch tower roof and add a missing beam in. Oh the delights of rushing. Anyway, with all that left to dry the tiling could not start for another few days.

Now the tiling has begun and would you believe it, all the tiles I had previously cut have gone missing, I think they’re boxed up somewhere but I’ve had to cut extra.

Once I’ve added the chimney (whoops nearly forgot that too) and completed the tile coverage I think I’ll get away with it. The chimney will be added on as a couple of pieces of foam board over the roof top. What you might not be able to see on the photo is the text on the added pieces of card taken from an Amazon delivery. It states how to responsibly dispose of the cardboard packaging, I’m not sure this was their original idea. 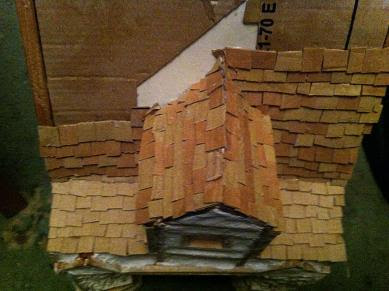