I’ll be continuing the story of the tapestry soon, talking about the first time I joined pieces together and then what happened when Paul McGann was announced. But for now let’s jump right up to date. 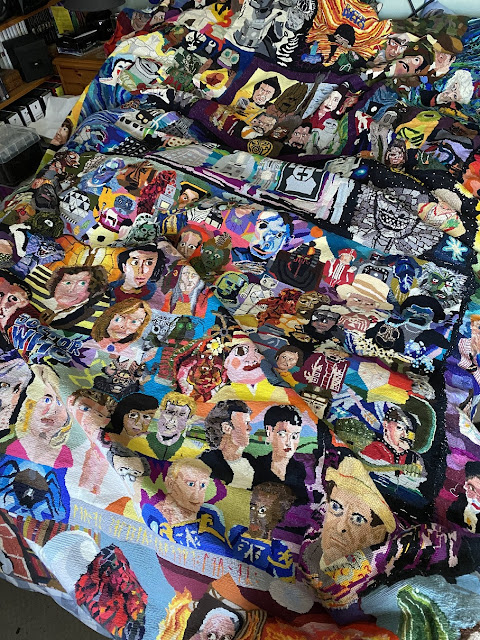 I have made a list of characters, things and creatures that I need to add to ensure I represent every story from the classic era properly. To my surprise this was a much larger list than I expected considering the amount of coverage I have already. These will be added to the sides, I have an overhang at the bottom from the last piece that was joined on and I’ll be working up from this. I won’t be joining one massive piece on, I don’t have a large enough piece of Aida available at the moment. Instead it will still be done in panels and attached. This will mean I can also work easier with a panel before it is attached; the last few have been very difficult because I have had to support the weight of the whole canvas whilst working. I can even take it away with me, should a miraculous vacation occur this side of the next zombie apocalypse. 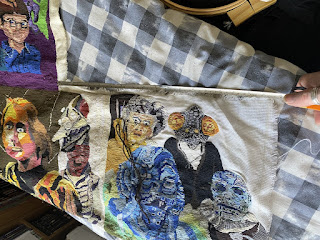 I won’t be joining one massive piece on, I don’t have a large enough piece of Aida available at the moment. Instead it will still be done in panels and attached. This will mean I can also work easier with a panel before it is attached; the last few have been very difficult because I have had to support the weight of the whole canvas whilst working. I can even take it away with me, should a miraculous vacation occur this side of the next zombie apocalypse. 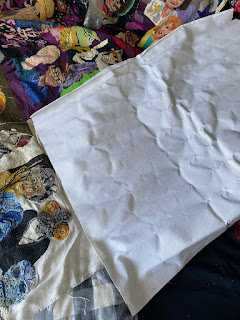 I have divided the missing list into two parts, one to go down this right hand side and the rest to work on another long addition to the left; this will balance up the overall look of the final tapestry.

I had to do a count up of the missing figures and work out an average size for each to ensure I can get them all in, until now I’ve sized by instinct, although there will be additional commentary on that in one of the next couple of history posts. Another thing I will be discussing in the history of posts will be the different sizes of aida, this time I'm using 'count 18' which is designed more for cross stitch rather than tapestry (or embroidery with wool). 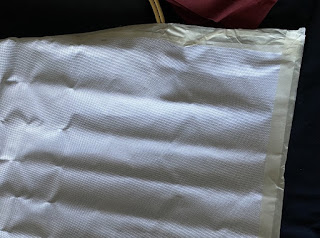 I have edged the aida with masking tape to try to secure the edges to prevent fraying which will happen if it is not edged. This can cause size issues if too much frays before you get the design finished. 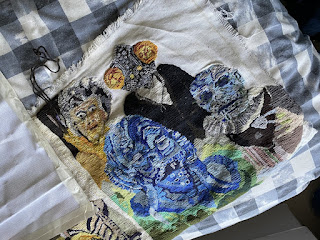 So what will be the first character to feature on the next piece?

The Story of the Doctor Who Tapestry (Part Two)

I often get asked the same questions regarding the tapestry: When did you start it? How long have you been doing it? It’s not actually that easy to answer because it has not been a continuous activity. But let me wind the clock back and try to provide some answers. (Part One here)

Part Two – Finishing the Seven Faces of Doctor Who.

Having started on the other Doctors I was determined to complete them. Even at this stage there were no plans to join them together. The other canvases were designed as individual pieces. 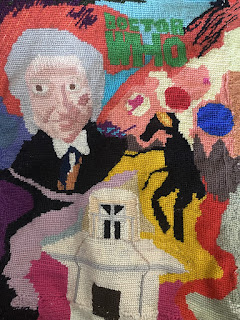 William Hartnell, the First Doctor included a Zarbi and the TARDIS console. The background is partially the titles and partially Vortis where The Web Planet was set. Although at the time I struggled to find a suitable reference photo for the console, so this part never got finished. To this day it has still not been completed. Maybe this is the next thing I should take a look at, there is so much more reference material available now. Back then we never had the luxury of all the classic series being available on DVD as it is today.. 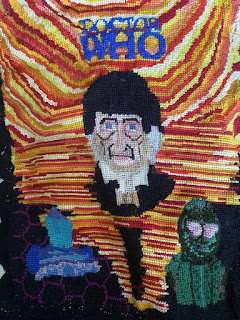 Patrick Troughton, like Hartnell, the background was difficult because these stories were in black and white, so I had to apply my own colour scheme to try and give some depth to the picture. Although later I was to create a pure black and white panel for the larger canvas, but more about that later. This time I went back to the initial design of Doctor and two besties including a Kroton and an Ice Warrior. The cover of the novelisation for The Krotons was an influence on this one. 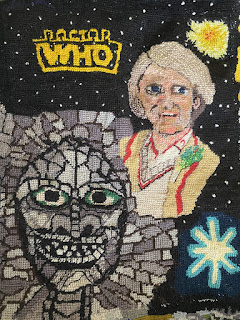 Peter Davison, this time I threw the design idea out of the window and just had the Doctor and the Malice from The Awakening. I think the Malice grew out of control on the tapestry leaving no room for anything else. The change in titles at the end of the Tom Baker era was reflected here in the massive use of black wool to create the star field title sequence that dominated both the 5th and 6th Doctor’s eras. 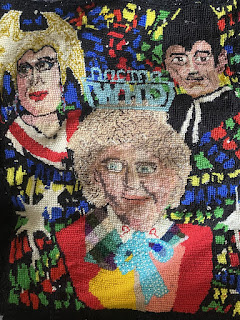 Colin Baker, here I went for the Trial of a Time Lord, which let’s face it was almost 50% of the VI Doctor’s time aboard the TARDIS. I went back to the initial design and included the Inquisitor and Valeyard as the additional characters, which balanced well, but this time looking down upon the Doctor. Focusing on the Trial serial also allowed me to jazz up the background with the colour flares that were introduced into the titles this season.

So there I was with seven Doctors, three of which were now framed and that was when an idea struck me, rather than framing them, how would they look joined together. But the backgrounds did not merge together, except maybe for Davison to Colin Baker. Something would have to go between them to join them and allow the backgrounds to merge. And that was when space and time exploded…

The Story of the Doctor Who Tapestry (Part One)

I often get asked the same questions regarding the tapestry: When did you start it? How long have you been doing it? It’s not actually that easy to answer because it has not been a continuous activity. But let me wind the clock back and try to provide some answers.

Part One – How it got started.

Let me start by going right back in time to when the craft came to my attention. We were on holiday one year, very probably staying down in Dymchurch, in a caravan and you could guarantee that at least one day of the week would be a washout with the weather. On one of our day excursions mum bought a tapestry kit to amuse herself on one of these wet days. It was a country scene, and when she had finished it dad framed it and it was hung on the living room wall. There followed two more of these country scenes and even dad got involved in doing some of the stitching on the third one as I recall.

I did ask, if we ever saw a Doctor Who kit would mum do it for me, never then did I think I would ever stitch one myself. Of course, by the late 80s there was no sign of such a kit and the status of the programme on the BBC was in a rocky place. I decided then that if such a kit could not be bought, I would try and design one myself. And so I did. 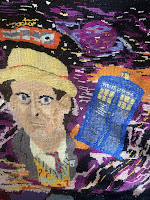 I started with the current Doctor at the time, Sylvester McCoy - already grand plans were forming, I would design one for each Doctor: Hartnell, Troughon, Pertwee, T. Baker, Davison and  C.Baker. Note the phrasing, one for each. At this time they were intended to be individual canvases for each Doctor. Indeed Sylvester McCoy, Tom Baker and Jon Pertwee were completed and framed by dad in wooden frames painted silver. Unfortunately I don’t seem to have any photos of these from when they were framed.

The design was quite simple, the Doctor’s face in the centre, something representing their era bottom right and left, for Tom Baker that would include K9 and for Jon Pertwee, Bessie.  The backgrounds were based upon the title sequences that went with the majority of their time aboard the TARDIS. The swirling patterns of Pertwee, Baker’s time vortex and McCoy’s animated space excursion. 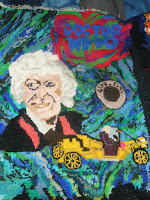 Mum was quite happy working on the background parts, but unlike the kits where the pattern to follow was painted on the aida (that’s the material with the holes of different sizes weaved into it to allow the needle and wool to pass through it) she was less confident with the faces taken from just photos. I sketched outlines onto the aida, specifying which shade went into each area but eventually it was clear I would have to do those parts.

Before I did venture forth with the Doctors, I got a small kit of my own to practice with. It was a robin, and may still be a storage box somewhere. It was tricky at first, getting the tension right, not pulling too tightly that you pulled the design out of shape or too loose that the stitches bulged out. That was when I discovered I quite enjoyed doing it too and took over with working the faces and the detailed parts. 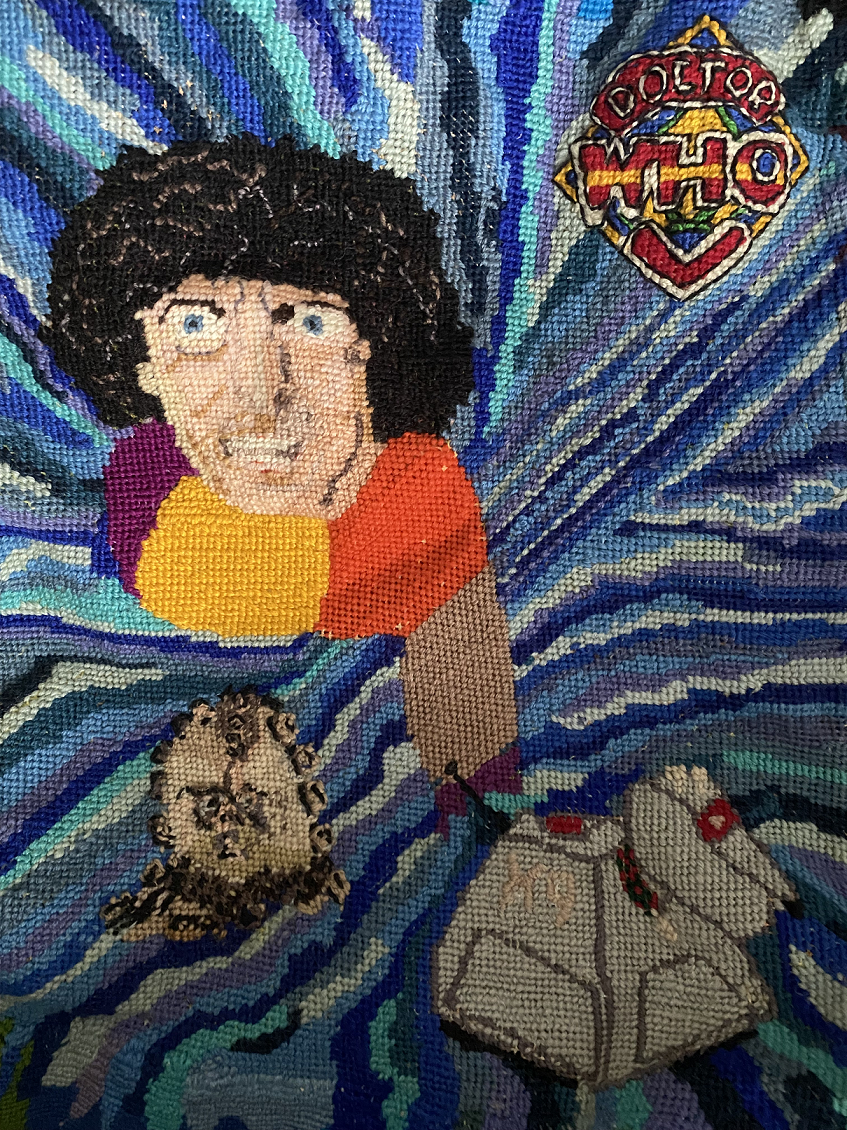 I got started on the others, but one thing and another happened and the time spent working on them became less and less. I started working, other things took priority until eventually the project got put on hold and was confined to the back of the cupboard for a time. This would have been around the late 1980s going into the early 1990s…

Part Two
Posted by DJ Kettlety at 11:58 No comments: