This weekend I started to work on the Ship & Hankor pub that appears in the Karl Trilogy, it is one of a number of buildings I want to construct that belong to the fictional world where the books are set. I’ve already made “Zandina’s Town House”.

The Ship & Hankor features several times in all three books. It is where Karl is caught telling stories to the dock workers, where he later gets taken from by the stranger, and where in book two his father has to be saved from a group of thugs. (Oh, and why the misspelling of the pub name? That’s a secret for now.) 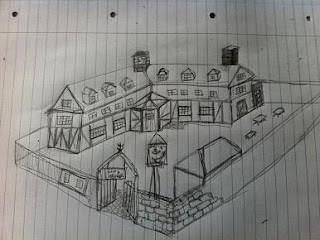 I’ve been sketching the design for the pub for quite some time, I know what I want. Now is the time to realise the design. Although I have some leeway, it is still my design and not a model of a known building I do have very specific features that need to be included and less chance to tweak it as it goes along. This may mean a bit more care and attention along the way. 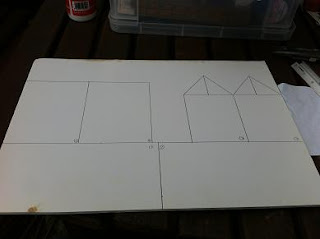 I’ve started by cutting out the basic frame using foam board. I pinned it together before gluing to ensure the general fit.
From some of the off cuts I made a couple of supports for the roof, creating the triangular shape to support the roof and about 1cm of foam board down as a beam to strengthen the sides. 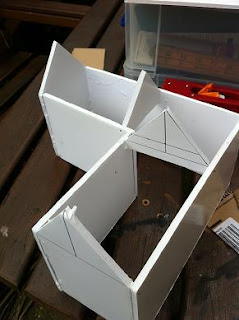 With this fixed in place I added the roof. The next part of the basic shape is to add the porch way main entrance to the corner and the small attic rooms in the roof.
At this point the bright blue sky turned dark and stormy and working out on the table became impossible. So the rest of Sunday was taken up with edits on book 2. 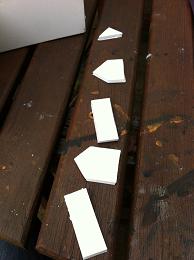 Monday night I cut out the porch pieces and fitted them together before attaching them to the main body, and then added a sloping roof. Next I added an additional back room; this is going to be the kitchen part with one of the chimneys.
I cut the three outer wall sides, then a from a scrap piece of foam board a fourth wall with roof point, which is glued to the outside main wall. This strengthens the kitchen piece and gives the roof something to glue on to at the other side.
If I find any more of the sketches I'll add to the later posts.
Posted by DJ Kettlety at 20:47 No comments:

Email ThisBlogThis!Share to TwitterShare to FacebookShare to Pinterest
Labels: "Ship and Hankor", Karl - Birth of Mystery

My Sunday update is once again a sad news one. Short on the heels of the Doctor Who world having lost Caroline John, now the wonderful Mary Tamm has passed away earlier this week.

Mary appeared in the Key To Time series alongside Tom Baker's Doctor. In this series the Doctor was tasked to locate the six segments and to do this he was given a new companion to help him, the Time Lady Romanadvoratrelundar (Romana for short). Romana brought style and elegance to the TARDIS, but could also be aloof and superior to the Doctor.

When you met Mary at the conventions there was no sign of that aspect of Romana, instead a warm smile greeted the fans along with friendly and witty chat. I will always remember when I first met Mary, coming away from the event saying how nice she was and looked forward to meeting her again.

Outside of Doctor Who Mary could be seen in Eastenders, Paradise Heights and Jonathan Creek to name just a few. She had returned to the part of Romana for the Big Finish Companion Chronicles and Gallifrey series, and had just recently finished recording some new adventures alongside Tom Baker for a series of audio releases due out next year.

All our thoughts are with Mary's family and friends at this sad time.

Writing, the myth and the magic.

I've had a few people ask, 'Oh how's the book doing?' I would love to say that it's flying off the shelves, the film deal has been done and I'm off to live the life of the rich and famous.

But that is far from the truth.

Writing a novel, or indeed a trilogy is time consuming and hard work.

I've just read a blog posting by another indie author, Steven Montano which sums up the whole world of being an indie author. I strongly recommend this as a good read.

At least it was a dry day, we even had a few minutes of sunshine; enough to fool me into going inside putting on sun block. The second I did this, the sun became shy again and hide behind clouds for the rest of the day. But I did manage to get the ghost town buildings varnished, so these are now complete. 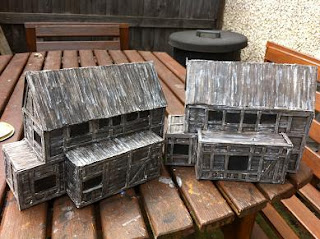 Last year when I thought I would finish these I decided to try out using a large tin of DIY varnish rather than the very expensive for what you get size model varnish. Let’s face it these are all wood buildings anyway so it is not as if I am using it on delicate figures.
So last year I bought this can of RONSEAL Quick Drying Varnish Matt Clear for interior doors and furniture.
It says dry to the touch in 20 minutes, actually outside today it was quicker than that, but to the touch is not quite the same as holding it in your hand, if you’re holding it the pressure is different and you still risk getting slightly tacky and sticky.
I tested it out first one a small area then tried one side of a building.
This also came with the added bonus of 33% extra free, so more models in the future then.
I applied it with a brush; it was clear but if you were too quick you risked getting foamy bubbles a bit like sea foam, especially around the fiddly bits like windows and beams. 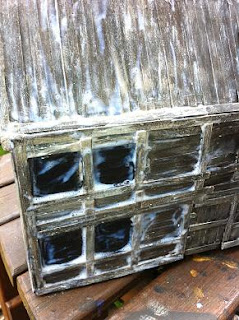 There was also a small amount of colour lifted off the models and mixed in with the varnish, although it was not enough to spoil the effect I had intended for these models.
Remember this was not designed for this work really.
However if you gave it a few seconds then manipulated it with a dryer brush you could clean it up and get a reasonable finish. Just don’t go too thick, I did make that mistake in one part and it is a bit patchy.
However having done the four outstanding models I am pleased that I decided to do this instead of the smaller tins of model varnish. 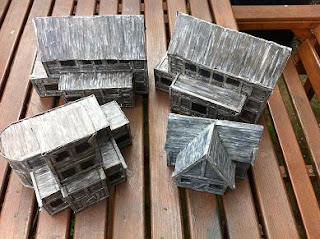 I have retaken all the ghost town gallery photos in the same style, and set all the models out together in mock up game layout. You can see these on the Gallery (Ghost Town) page. 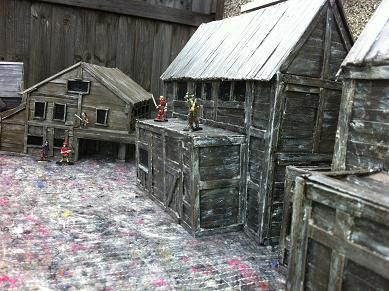 At the end of one of the wettest Junes, which has led straight into an equally wet July, I took myself off to the southwest coast for a week. I got the opportunity for a cheap break down to Newquay in Cornwall, more renowned these days for the stag do club nights rather than Olde Worlde England, but nether-the-less if you are not there for the parties then avoiding the Friday and Saturday nights are your best options.
My main aim was to get away and complete the draft of the second book in the Karl trilogy “Karl – The Lost Adventurer” and breakout the plot for the third and final book which currently has the working title “Karl – Demolich Rising”.
As I said it was very wet, yes it managed to rain every day. Even though we (I wasn’t alone, that’s not the royal we) did get out of the apartment a few times. We visited Looe, The Monkey Sanctuary near(ish) to Looe, which takes in orphaned and rescued monkeys that can not be returned to the wild, and NewquayZoo a charity which does conservation work in many parts of the world.
I did achieve most of the work I set out to do. I would like to have achieved more, there is always more that could be done but I did complete the draft of book two and the story break down for book three.
Finding somewhere to eat in the evening (we self catered most of the time) is not easy if you want to avoid the general standard fast food options. We did find two nice restaurants, both places we had visited in the past on a previous visit to Newquay.
One was the Newquay Meadery on Marcus Hill, which is a mediaeval themed pub and restaurant, with replica swords on the walls and very much Ye Olde England style. This is a good place for steaks and other old style meats when in season. They are very proud of their mead, but I’m not a fan of mead to be honest.
The other place I’d recommend is Ye Olde Dolphin on Fore Street. This is reported to be Newquay’s oldest restaurant, I believe that it has been through troubled times between our visits but it has now reopened and serves some wonderful seafood dishes and the service is excellent as well.
I didn’t get many photos taken this visit, I mainly got pictures of rocks and sea, as the theme I want for the cover to the next book will be a misty rugged coastline, following on from the mysterious forest used for book one. These were mainly for personal inspiration rather than the actual cover.
Now I’m back I’ll need to get on with varnishing the coffee stick buildings and 'Zandina’s House', and then get to work on the ‘Axilion Trade’ shop and ‘The Ship and Hankor’ pub.
Newquay Zoo
www.newquayzoo.org.uk
The Monkey Sanctuary
http://www.monkeysanctuary.org/
Ye Olde Dolphin
39-41 Fore Street, Town Centre,
Newquay, Cornwall, TR7 1HD
Newquay Meadery
Marcus Hill, Newquay, Cornwall TR7 1BD
Posted by DJ Kettlety at 17:43 2 comments: