Another weekend with only a few hours spent working on the models.

First I’d like to say a big thank you to all those who have promoted my blog on their sites, your support and encouragement is much appreciated as well as any comments left. Speaking of comments... 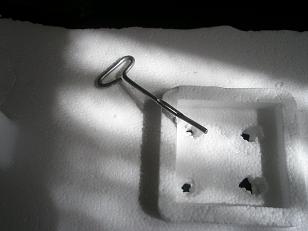 Luckyjoe asked about murder holes for the entrance way to the castle ruins. I admit I forgot all about those small holes in walls and ceilings where defenders could pelt invaders with rocks or pour down boiling oil. These were a very vital part of a castle’s defensive measures. To really do justice to them is a bit late now, as I’ve already lined the entire entrance with the filler, but there was an area along the top where a square shape on the original polystyrene did cry out for something a bit extra to make a feature out of it. 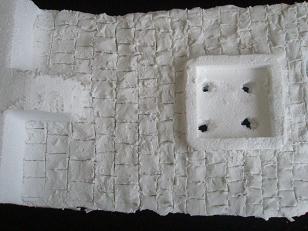 Using a metal rod I managed to break through the wall filler and make four suitable holes in each corner of the square. These will be turned into some murder holes, but I will be making an additional piece for the entrance later so I’ll make certain I give more thought to the forward design.
Cheers Luckyjoe now who ever GMs using these has an extra weapon to use against the players, guess I should start writing my own adventure. (BigLee beware, you think our current GM is EVIL – sign off with manic laughter...) 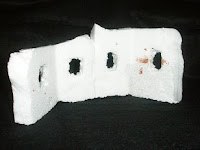 I also realised that there were no window pieces either, so in the other curved section I was working on I cut out some small window shapes this time before I added the wall filler. 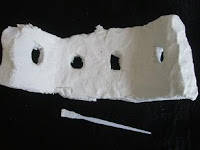 Up until now I’ve been using plastic coffee sticks to cut the stone shapes into the wet wall filler, but they don’t actually last very long and soon snap.
So I’ve given in and bought a new small chisel blade to use for the stone work – a quick trip to the local hobby shop this weekend. 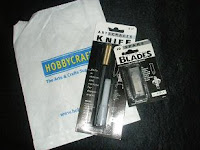 This wall and the flag stone tile effect I’ve put on to the top of the entrance way were carved out using the new blade, I don’t think you can tell the difference.
I’ve only got as far as undercoating with black acrylic paint this weekend – I’m going to try and get the grey colouring done during the week if I get a chance. 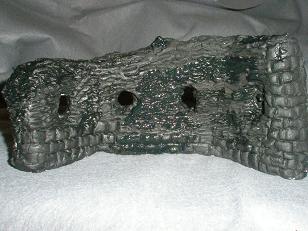